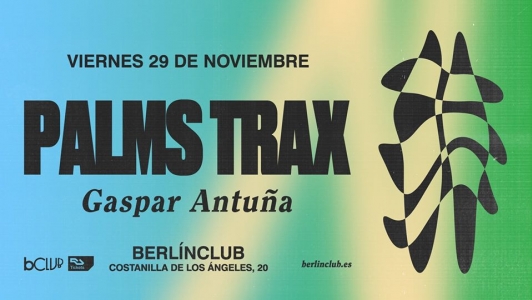 PALMS TRAX
Palms Trax is a producer and Dj based in Berlin, Germany. His first record was released in October of 2013 on London-based imprint Lobster Theremin.

For aspiring DJs and producers, or indeed anyone who appreciates a good story, the genesis of Palms Trax couldn’t have read any dreamier. You know the one; curious yet naive son of the English Riviera lands a job at one of London’s leading record stores and discovers the masters of Chicago house and Detroit techno. Later, stumbling around Berlin, his primitive attempts to emulate the sound of his newfound heroes accidentally land him a bona fide dance floor hit. A gradual but steady stream of EPs courtesy of Dutch dance music powerhouse Dekmantel have allowed his productions to blossom in richer, smoother directions. On 2015’s ‘In Gold’ EP, and throughout the following year’s ‘High Point on Low Ground’, halcyon hallmarks of house - euphoric piano lines, bubbling acid and luminescent keys - are shot through with Donaldson’s tough, distinctive percussion.

It’s that same connection with Dekmantel that has encouraged Donaldson to quickly, impressively evolve as a DJ of some distinctive taste and talent. A memorable performance at Dekmantel’s flagship Amsterdam festival in 2015 captured open hearts, lost minds and aching feet. Since then, the sound of Palms Trax has been a fixture on their enormous main stage, drifting seamlessly between vintage house, esoteric disco and the various shades of a bubbling UK underground he has helped define. Occasional back-to-back performances with the likes of Hunee, Young Marco, Antal and Midland, all DJs regularly credited for their breadth of musical knowledge and sheer versatility, speak volumes for Donaldson’s DJing nous, which has lead him on an international trail; from South America to Australia, and from Panorama Bar to Concrete, Contact, De School, and Lux.

GASPAR ANTUÑA
Resident DJ at berlinClub, responsible for the monthly Papaia Club party and co-producer of the venue’s DJ sessions, Gaspar has been with berlinClub since its beginnings at the former location en Calle Jacometrezo. Music teacher, booker, label manager and, above all, DJ, Antuña’s sets are characterized by their broad range of sounds, with groove as their unfailing north. His sets lean toward genres like Disco, House, Soul, and Electronic Club Music, but are always full of surprises from his expansive musical background.