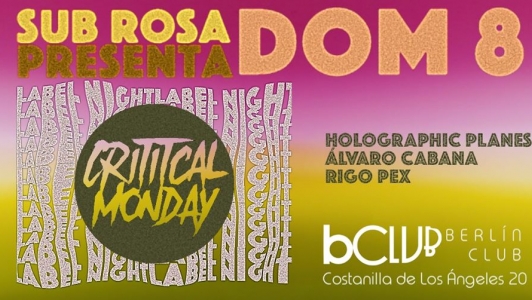 NOBODY WILL WORK ON THIS MONDAY.. best excuse to invite Critical Monday Records. The french label was founded by Damon Jee & Bonnie Spacey... and will be showcasing:

Holographic Planes - a project formed by Spanish DJ and label owner Alvaro Rotten City Cabana teaming up with the mighty french Damon Jee, one of the most relevant producers of the new cosmic- techno-rock-wave at this moment. The pressure of techno with synth harps, rock and post punk guitars, electro+ish flavors and the deepness of the kosmische music.

Rigo Pex is Club Sub Rosas resident dj. His unabashed and eclectic taste transforms the dancefloor in a cocktail where textures and styles mix in a somehow organic way.