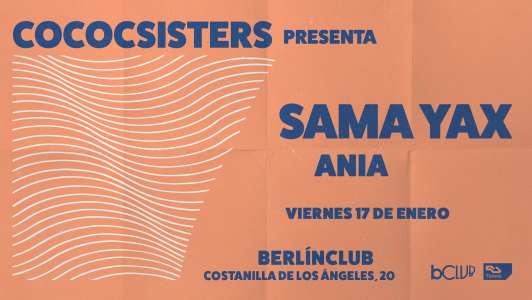 CococSisters is dedicated to bringing all women, cis and trans, to the decks for quality Disco, House, and Soulful dance sessions.

SAMA YAX
Sama Yax is a natural-born collector. For starters, she collects origins: between Mexico and Bilbao, and currently residing in Barcelona, she’s spent 32 years on a search. Of course, she also collects vinyls, especially Disco, Latin, Afrobeat, House, Brazilian and Jazz. She collects experiences too: resident DJ at the legendary Nitsa club in Barcelona and part of the Discos Paradiso family, she’s taken her sets to festivals like SoundEat! and Materia, venues like Freedonia and parties like Goze and Baang. She’s even collected some milestones along the way: in 2019, she closed the Saturday-night main stage at Primavera Sound alongside DJ Rosario to celebrate the year of The New Normal. Ah, and activism is also in her scope: she’s one of the main instigators for applying the “No callem” protocol at Primavera Sound, protocol to raise awareness and offer help for females that are victims of sexist behavior. She also coordinates the booking department at the festival, works as hospitality manager for guests, agents and artists, etc. In sum, she’s the living image of the line “fight for your right to party, and party for your right to fight.”

ANIA
Ania never had a doubt: her passion is music. Thousands of hours listening, at a generous volume, to Jazz, Soul, Funk, House, Disco, Latin, Brasilian, anything interesante that fell into her hands. Her selections started in the 90s, when she was first behind the decks in her native city of Oviedo. In 2002, she won the “Girls on the Decks” contest at Madrid club “La Boca del Lobo”, and from there began making appearances in DJ booths all over the capital: Mojo Club, El Junco, Bogui Jazz, Siroco, berlinClub… Her sessions are eclectic and full of a colorful array of rhythms, submerging themselves in HIp Hop, Jazz, Soul, Funk, Disco, House… Dancing is simply an inevitable consequence.