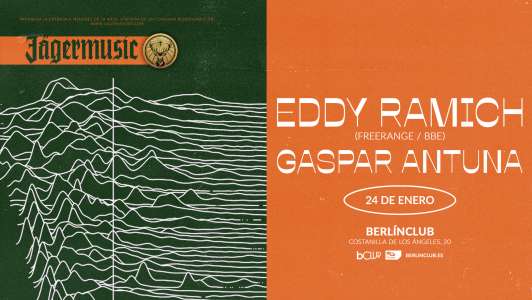 EDDY RAMICH
Eddy Ramich is one of Croatia’s long time veterans in the eclectic and house scene. He has greatly influenced the development of festivals in Croatia, making him one of the key figures in the Southeast European dance music scene.

Eddy himself confirms that DJing is his strongest point, whether as a radio or club DJ. Rich music background, energy he shares with the crowd and wish to support and spread good music. Currently he is working with the Portuguese producer JEPE on a new project. As well is working as one of the curators and bookers of the Southern Soul Festival in Montenegro.

Now based in Berlin, after 30 years of being dedicated and passionate about music, he continues to widen and spread his vision to crowds worldwide. Eddy will celebrate his 30th years career with dj gigs and other various projects the whole 2019.

GASPAR ANTUÑA
Resident DJ at berlinClub and responsible for the monthly Papaia Club party, Gaspar has been with berlinClub since its beginnings at the former location on Calle Jacometrezo. Music teacher, booker, label manager and, above all, DJ, Antuña’s sets are characterized by their broad range of sounds, with groove as their unfailing north. His sets lean toward genres like Disco, House, Soul, and Electronic Club Music, but are always full of surprises from his expansive musical background.

Sevenmad
Blue Lights in the Basement: