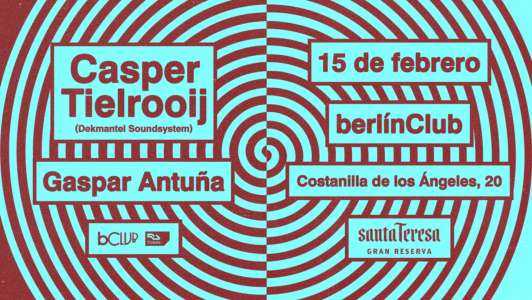 CASPER TIELROOIJ
Founder of label Dekmantel Soundsystem and Dekmantel Festival – currently the world-wide reference in electronic festivals – Casper combines all the genres he likes - such as (deep) house, techno, disco, dub (amongst others) - into one distinguishing mix that represents what he stands for.

He entered the world of music through the clubbing scene at the age of 16. One year later he bought his own decks, which allowed him to do mix things his own way. Originally mostly pounding, US-based techno, but throughout the years his taste has emerged from techno into primarily deep house coming from the windy city Chicago and motor city Detroit. Currently further exploring the worlds of disco, afro- and brazilian beats, which he describes as a big, yet exciting, mystery.

GASPAR ANTUÑA
Resident DJ at berlinClub, responsible for the monthly Papaia Club party and co-producer of the venue’s DJ sessions, Gaspar has been with berlinClub since its beginnings at the former location en Calle Jacometrezo. Music teacher, booker, label manager and, above all, DJ, Antuña’s sets are characterized by their broad range of sounds, with groove as their unfailing north. His sets lean toward genres like Disco, House, Soul, and Electronic Club Music, but are always full of surprises from his expansive musical background.